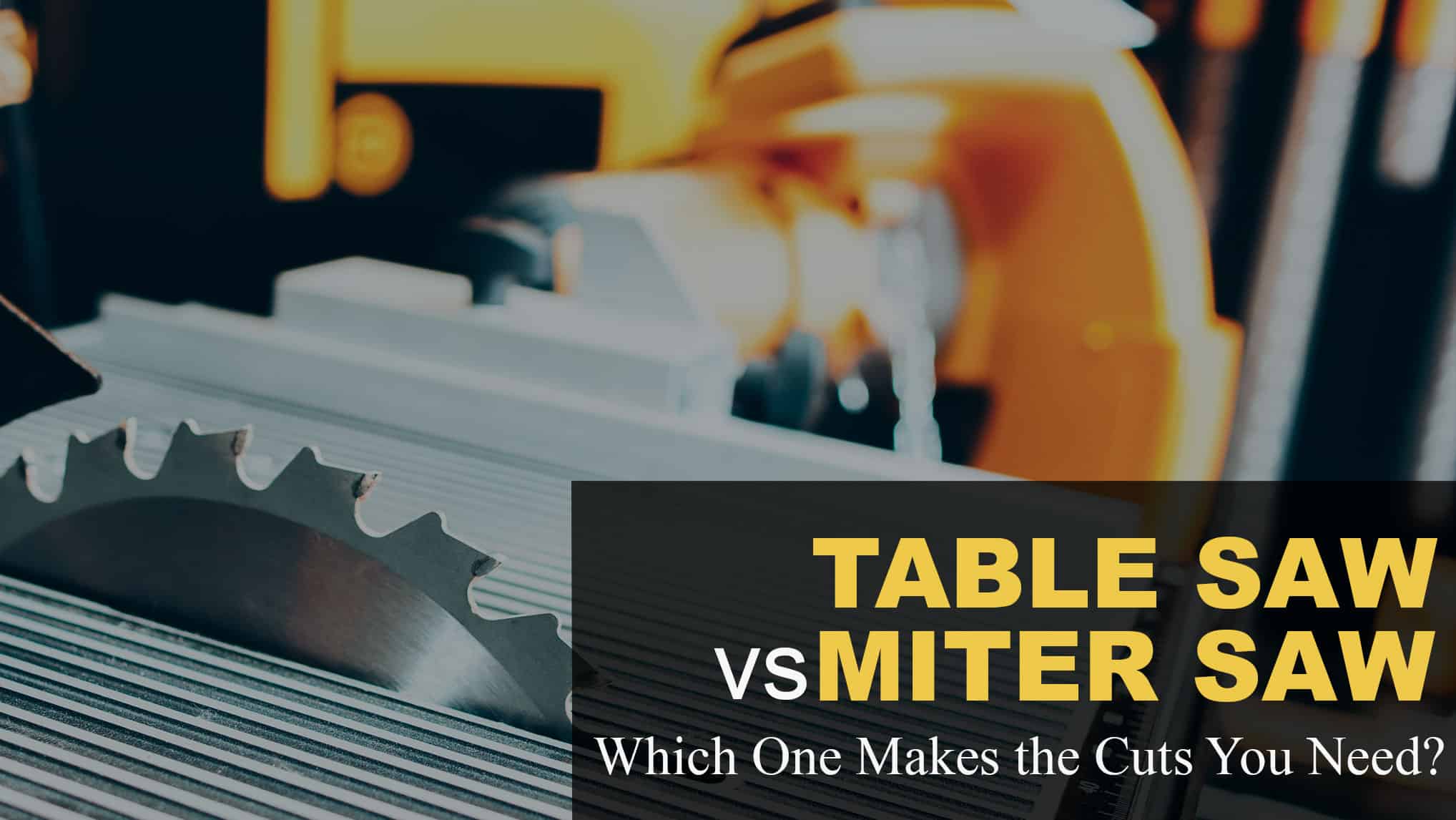 When you’re looking to use a power saw for woodworking, carpentry jobs, or even DIY projects around the house, it often comes down to table saws and miter saws.

Which saw should I buy first?

Which one is better for beginners?

Do I need a miter saw if I own a table saw? Or vice versa?

When I first got into woodworking, I had the same questions. I was working with a limited budget and I couldn’t afford to buy both a table saw and miter saw at the same time. I needed to figure out which power saw would work best for the projects I wanted to do.

And that’s really what it comes down to. Which tool is better to accomplish the job at hand?

ToolLogic.com earns a commission from purchases made through links in this post. Learn More

What Is a Table Saw?

In the most basic terms, a table saw is a power tool with a flat tabletop and a circular saw blade that protrudes through the surface of the tabletop through a slit.

The blade is located in a fixed position, mounted under the tabletop and driven by an electric motor. The tabletop works as a support surface for the material you are cutting.

You can cut materials of various thicknesses by adjusting how much of the blade is exposed through the tabletop. You raise and lower the blade to adjust how deep or shallow you want the cut to be.

Table saws include a rip fence, which is an adjustable guide that helps you make rip cuts that are precise, even, and safe. Rip fences are essentially flat metal bars that run parallel to the saw blade. You adjust the fence closer to or further away from the blade to make narrower or wider cuts.

A rip-cut is when you cut lumber parallel to/with the grain. You typically use a rip-cut to reduce the width or thickness of materials.

They’re available in a variety of models, ranging from stationary cabinet saws to portable contractor and compact bench-top table saws.

Table saws are a staple of woodworking workshops, for both professionals and hobbyists. Due to its versatility and ability to make a wide variety of different types of cuts, it’s one of the first saws you should buy as a woodworking beginner or when equipping your workshop.

What Is a Miter Saw?

A miter saw is a specialized power tool for making precise and repeatable crosscuts and, as its name suggests, miter cuts.

A crosscut is when you cut lumber perpendicular to/across the grain. You typically use a crosscut to shorten the length of materials.

Like a table saw, a miter saw blade is circular and powered by an electrical motor. But that’s where the similarities end.

Similar to table saws, the fence of a miter saw is solid and made of metal. However, it’s built into the base of the tool, perpendicular to the blade and can’t be adjusted.

Miter saws are portable but need to be set up on a level and stable surface in order to make accurate cuts. It’s a good idea to use a dedicated miter saw stand when working with long pieces of materials.

Miter saw stands support long pieces of lumber and keep them at the same level as the base of the saw. Some models come with built-in “stops”. Stops allow you to cut materials at the same length consistently.

They are a contractors and carpenters workhorse.

What’s the Difference Between a Table Saw and a Miter Saw?

In the grand scheme of things, what sets these two power tools apart?

The major differences between the two saws come down to three factors. First, how do they work? Second, how accurate are they? Finally, how easy are they to move around?

A table saw has a rotating blade in a fixed position. You push the material towards the blade to cut it.

On the other hand, you keep the material tight against the base and fence of the saw and bring the blade to the material with miter saws.

What makes table saws great is how versatile they are. Rip cuts, crosscuts, miter cuts, and bevel cuts. It can do them all. But, it’s really only accurate with rip cuts and bevel cuts that go with the grain.

You can use a miter gauge on a table saw to make angled cuts. However, most miter gauges won’t fit perfectly in the miter slot of the table and can move side-to-side. That side-to-side movement is called “slop” and can make the cut inaccurate and non-repeatable.

Cross cutting on table saws is similar. You can quickly crosscut a piece of lumber by hand with no guides or fences. It just won’t be an accurate cut. You can also build a crosscut sled to make repeatable cuts, but they can have the same “slop” problem that miter gauges do, which can prevent you from making a precise cut.

So, if you are concerned about the accuracy of your cuts, it boils down to this:

The portability of table saws depends on what type it is. Cabinet saws and hybrid table saws are designed to be stationary tools. Contractor grade and bench-top table saws are made to be taken to job sites. So, they’re portable but heavy and cumbersome to move.

Miter saws are inherently portable. Maybe not as much as a circular saw, but definitely more than a table saw. They become much more maneuverable when attached to a rolling miter saw stand.

As I mentioned previously, table saws are extremely versatile and can handle just about any kind of cutting job. It’s capabilities include:

Table saws are primarily used for working with larger pieces of materials. Although, I wouldn’t recommend crosscutting or mitering long materials. That’s what a miter saw is for.

But that doesn’t mean you can’t use a table saw for detailed work. You can use your table saw for a wide variety of tasks using various table saw sleds and jigs.

Ask any woodworker which tool in their workshop they couldn’t live without, and without hesitation, most will tell you it’s their table saw.

Miter saws are essentially carpentry tools. Designed for making accurate, repeatable cuts. You can typically use them for the following types of jobs:

Woodworkers, on the other hand, might not use their miter saw on a regular basis.

As you can see, table saws and miter saws can do many similar things. However, they both do certain tasks better than the other.

If you’re trying to decide whether to get a table saw or miter saw first, it really comes down to what kind of jobs and projects you’re planning to do more of.

In my case, I was wanting to build a desk and do some other woodworking projects. So, I bought a table saw to start with. When I started to remodel my house and needed to install some baseboard trim, having a miter saw was just as essential as my cordless brad nailer.

The best power saw for you is the one you’ll get the most use out of.

Hopefully, we’ve helped make this decision easier for you!

Which power saw did you purchase first? Let us know in the comments below.

Do they make a table saw and miter saw combo tool?

There are a few brands that made combination table saw/miter saw tools, but they were only available outside the US. The table saw functionality of these combo tools was extremely limited to ripping small widths of lumber as the table and rip fence were tiny.

Is a table saw or miter saw better for crosscuts?

For the majority of crosscuts, a miter saw would be the best tool to use. The only time I would use a table saw over a miter saw for crosscuts, provided both are available, would be for material that is too wide or thick for the miter saw to cut in one or two passes.

About the Author Josh P.

I'm a computer geek by day, but I've been building and fixing stuff for as long as I can remember. I have a passion for DIY and woodworking projects and my wife considers me a tool junkie. One day I hope to finish the never-ending list of home improvement and remodeling jobs around the house.